What We're Drinking: The Rusty Nail - The Drink That Satisfies

Monday - 6pm. The Barfly walks into a South Brooklyn dive bar and finds a seat at the scuffed wood bar. The bartender is a wiry “dude” in his mid thirties and wears a camp green t-shirt two sizes too small for his nascent beer belly. He arches his eyebrows and nods in The Barfly’s direction. The Barfly scopes out the place. A couple of pensioners stare into their measured shots of Old Grandad. Some floppy haired hipsters in Members Only jackets are “slumming” it in Brooklyn drinking Schlitz out of a can. A Corrections Officer from the Brooklyn House of Detention reads the funny pages in the corner seat with a Bud and a shot. Then the jukebox starts playing Johnny Mercer forchrisake! 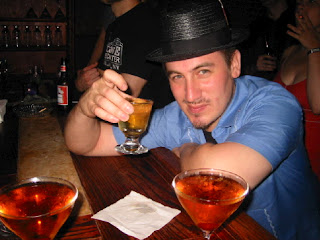 Swiveling back on the badly upholstered stool,The Barfly signals to the bartender, “got any Drambuie?”

"Sure." Bartender points to a dusty bottle on the top shelf with its seal unbroken.

“Lemme start off with a Rusty Nail.”

"Want a shot of Pepto-Bismol on the side", the bar keep asks.

When I embarked on my journey to write this review, I went right to a few local dive bars. I believed the hype. Naturally, a Rusty Nail could only truly be enjoyed in an establishment with peeling paint and New Year’s Eve decorations circa 1987. The Rusty Nail is a quintessential “Old Man” drink that sounds like it will knock you in the gulliver and send you on a third class trip to guttersville. The name alone is enough to send a shiver down your liver. The image: A nail. Sharp. Metallic. And rusty! Not too appealing if you ask me. It does not evoke the ante bellum scenery of a Mint Julep. Nor does it enjoy the sophistication of the Manhattan. On the contrary, when we think of the Rusty Nail, we think of some hole in the wall bar serving the flophouse residents.

Blended Scotch. Drambuie. A twist. An Old fashioned glass. That combination doesn’t sound like rotgut or bathtub gin! Wait, what is Drambuie anyway?

According to the company, Drambuie means the “drink that satisfies” in Gaelic and has a long history dating back to the mid-18th century. It was a secret recipe of Scottish patriot Bonnie Prince Charles circa 1746 and even played a role in Scottish history. Prince Charles tried unsuccessfully to usurp British control over his homeland and sacrificed his secret recipe as payment during his exile to France. The liquor is a combination of Scotch blends and heather honey. It can be imbibed on the rocks or in mixed drinks. After reading up on the regal story of Drambuie, it’s hard to believe that the honored liquor has become associated with such a dive drink as the Rusty Nail.

When choosing the brand of blended Scotch to use in your Rusty Nail, the quality is important. Cutty-Sark Scotch is one of my favorite medium quality blended scotches. In my opinion, it can hold its own against the popular Dewar’s any day of the week. Cutty-Sark seems to complement the Drambuie by not being overwhelming. For my second Rusty Nail, I upped the ante with Johnny Walker Black. Needless to say, the drink was sublime. Black’s rich and velvety flavor mixed well with the honey in the Drambuie and made the drink a pleasure to sip and savor.

2 1/2 oz. of a Scotch Blend - Cutty-Sark(if in a good Dive)or Johnny Walker Black (on payday)
1/2 oz. of Drambuie as a floater
Twist of Lemon

Serve on the rocks in an Old Fashioned Glass and garnish with a twist.

Blended Scotch drinkers, you will love the Rusty Nail. Try one next time you desire a scotch and soda or a Rob Roy on the rocks. It doesn’t have to be in a dive bar. Indeed, let’s help the “the drink that satisfies” find its way out of the gutter and onto the lounge drink menu.