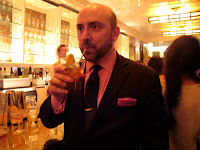 Fredo is Editor-in-Chief and resident cocktail man writing the Barfly's Beat and What We're Drinking columns.  A veteran of the lounge scene since the mid-1990s, he also regularly contributes to the "Happy Hour" column at Umami Mart blog and can be found mixing drinks at many New York retro-vintage events. The Queens native takes inspiration from cocktail aficionado Count Camillo Negroni, bon vivant Charles H. Baker, Jr., and sprezzatura icon Marcello Mastroianni. 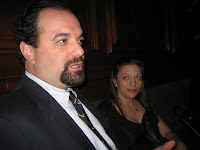 The Senator was our Editor and a former big band singer,
ex-newspaper publisher, and professional lounger. Senator penned the Lounge Doctrine which forms the basis of Loungerati's philosophy. The Senator delivered this cocktail canon at the iconic Algonquin Hotel during the annual Hotel Bar crawl. On August 20, 2021, the Senator passed away after a brief illness; he was surrounded by loved ones as he left this world. We  salute the Senator knowing he is holding up the bar until we meet again. Rest easy pallie. 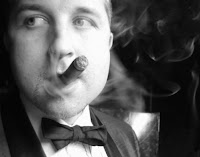 Eff  is the Editor-at-Large and writes the Lounge Essentials and Angolo Di Modo columns. A sparkling one, for sure, our man Eff is part arbiter of refinement, part Lenox Hill boulevardier and, through it all, quite Sicilian. His idea of excitement includes dodging the behemoth raccoons of Central Park, in his German sports car. With his Homburg cocked precariously on his head, he saunters out into the night, in search (specifically) of cultured amusements. Steady, Eff! With a temperament is that of a bon vivant, he’s quick to gift a Cubanos or refill your highball. When not visiting the most fashionable of locales, he’s certain to be advancing cultural pursuits, all-the-while spoiling his fair moll.