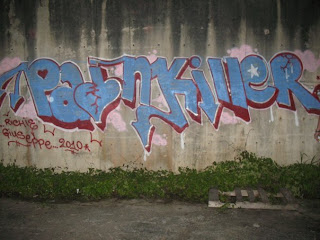 The First Wave
The first wave of the Tiki revival hit New York ten years ago with the opening of bars like Zombie Hut (Brooklyn), Otto's Shrunken Head (14th Street), the Lei Bar in Niagra's basement (Ave A),the clubby Tiki Room (Flatiron), and the kitsch 1950s Polynesian themed Waikiki Wally's (East Village). These places were heavy on retro kitsch factor and gimmicks. The worst offender was the Tiki Room, an awful nightclub in the Flatiron district that catered to the B&T. This place had wide screen HDTVs over the bar and their cocktail program was closer to a Spring Break bar than the Tonga Room. In our opinion, they were straight up poseurs more interested in capitalizing on a trend than paying attention to the history and craftsmanship of the genre. Other bars like Otto's Shrunken Head and Zombie Hut got the ambiance and inspiration right when they first opened. It seemed like they were taking pages out of the Trader Vic's play book circa 1956. Unfortunately, the same attention to detail and quality was lost at the bar. The main criticism of the first wave is the lack of fresh ingredients, proportioned pouring, and artisanal touch that has come to typify the new generation of top cocktail bars. However, in all fairness, they were not all mediocre drinks and sugary hang overs. I do thank them for putting Tiki back on the radar after forty years in the vault.

The Desert Island
In recent years, there have been some gems among the coal. A disciple of Tiki, Brian Miller of Death & Company and Joe Swifka of Elettaria preached the gospel of Don the Beachcomber in his classics. Miller slayed notions of the genre's fad with reinterpretations of the classic island cocktails. My favorite being a Gin version of the Zombie called the Winchester. This concotion stays true to the Zombie formula but uses three types of gin in lieu of rum. A Swifka original is the Black Pearl, which is Tiki-fied old fashioned using Cruzan Black Strap rum in addition Old Forester Bourbon as the base spirits. This proved Tiki was not pigeon holed. Quality ingredients and creativity kept the genra alive in the late-2000s when the trend and flavor of the month establishments like the Tiki Room and Waikiki Wally's were washed away. Thank the Tiki Gods for Elettaria's Tiki Mondays!

Tiki's Revenge
Once again the trade winds are guiding us to the Forbidden Island, so queue the Les Baxter but also add Desi Arnaz to the mix. This time around prepare for cocktails made correctly! The wave is moving from the Pacific Coast to the Atlantic. In San Francisco, Smuggler's Cove which opened in December 2009, has 70 plus cocktails on their menu and top talent from West Coast bar scene rolling the drinks. In New York, Painkiller is under construction in the Lower East Side. The noticeable differences with these bars is they draw their inspiration from the Caribbean in addition to the South Seas. They should really be called Rum Bars in the tradition of Trailer Happiness in London. It is clear that the Rum Revolution illustrated in Pete Wells New York Times article is in full swing.

Dutch Kills owner Richard Boccato and award winning bartender Giuseppe Gonzalez should have Painkiller open by the Ides of March but this won't be another Trader Vic doppelganger. I'm expecting something out of Mean Streets. According to Eater, Boccato says:


"Since the team is planning to blend 1970s New York culture and 1940s tiki culture, this may just be the best-ever tiki bar. Even the address is cool."

That cool address is the former East Side Company space on Essex and Grand. Expect freshly squeezed juice, an ice program par excellence, lots of falernum, private reserve rums,the classics made to perfection, as well as inventive cocktails and punches.

So until you can venture to PK NY to try the namesake, enjoy one of the British Virgin Island's most famous drinks:

Stir the juices and creme in bar glass, then add rum, stir again. Fill goblet with crushed ice, serve the mixture, and top off with dusting of fresh nutmeg. 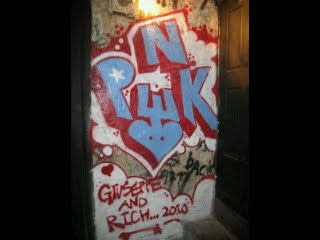 (Photos of PK NY courtesy of Giuseppe Gonzalez)
Posted by Loungerati at 7:21 PM No comments: 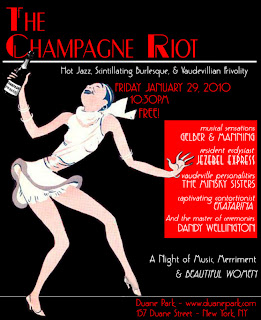 Join this raucous bunch, and bring sex, song and scandal to the Duane Park Stage.

FREE ADMISSION! Duane Park's delicious late night menu will be served, so you can come for dinner (or just a drink) and see what the Riot is all about!

Come on... what's wrong with a little bubbly now and then?" 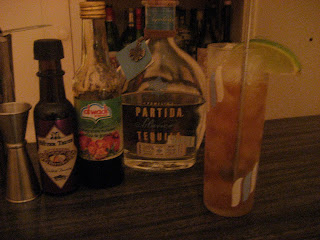 One of my favorite tequila cocktails is the Mexican Firing Squad Special. This Charles H. Baker cocktail was allegedly created by traveling bon vivant after an evening in Mexico City being "herded into fancy, dull places, served too warm drinks. And finally on 1 occasion we broke off by ourself, sought out this bar, (and) ordered things our own way."

Partida Blanco is smooth 80 proof 100% agave tequila with a crisp and dry finish. It's bouquet has a delicate hint of citrus and slight floral aroma. Partida's tequilas are "estate-grown premium tequila" from the village of Amatitan in the heart of the Tequila distilling region. The Blanco is unaged and thus blends well in mixed cocktails such as the Mexican Firing Squad Special. Partida also produces excellent Reposado (aged 6 months), the Anejo (aged 18 months), and Extra Anejo Elegante (aged 36 months) types of tequila. The Reposado would also work in this cocktail.

I "improved" this recipe by substituting Al Wadi Pomegranate molasses (1/2 oz) for the grenadine and Bitter Truth Bittermans Xocolatl Mole bitters for the Angostura.

Combine the ingredients and dry shake, then add cracked ice and shake until ice cold. Then strain into the Collins glass packed with cracked ice. Garnish with lime wedge or if you are Charles H. Baker bored of warm drinks in Mexico City - pineapple, orange slice, and a cherry! What a nightcap! 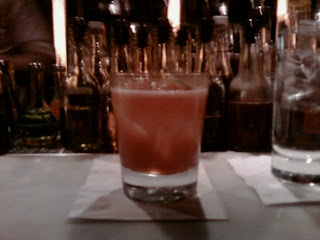 Optional: Top with seltzer water and you get the fizz version of the cocktail.

You may obtain Al Wadi pomegranate molasses at Sahadi Importing Company in Brooklyn or Kalustyan's who sell this product at their online shop. The Bitter Truth Bittermans Xocolatl Mole bitters is available at Cocktail Kingdom and the Boston Shaker.

Where to get it: The Franklin Mortgage & Investment Company, Philadelphia, Freemans, NYC, Mayahuel, NYC, The Varnish, Los Angeles, and the Zig Zag Cafe, Seattle.

(Bottom Photo courtesy of Seven Red, taken at the Franklin)
Posted by Loungerati at 5:07 PM No comments: 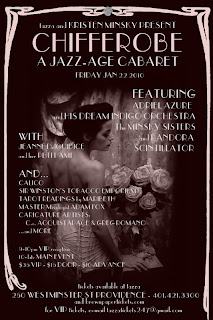 Our gal in Providence, the delectable Kristen Minsky is producing a real doozy of a Winter Ball. Here is the skinny:

The time is near for CHIFFEROBE: A Jazz-Age Cabaret, part deux! On the evening of Friday, January 22, Kristen Minsky and Tazza are teaming up again to bring you all of the dark nightlife sizzle of our premier event with all of the bohemian romance of early 1900s Paris! Think feathers, artists, champagne, chocolate and absinthe, but of course!

Entertainment for the evening includes the nostalgia music maestro himself Adriel Azure and His Dream Indigo Orchestra, who have invited special guests; vocalist Wednesday Greenbomb (new group member) and accordionist Tom Persinos (solo 9-10) sitting in. They will finesse our heart-strings with the majestic sound of Jazz, Tango and other gems of old. Having just been voted Best Burlesque Act 2009 by Loungerati, 1920s tap sensations The Minsky Sisters will be back on the floor for a flap, a tap and a celebratory glass of champagne with Greek goddess and New York-based burlesque phenomenon Pandora Scintillator. Puppeteer, Jeanne DelGiudice, will introduce you to her petit ami, and a little green fairy will be making her way through the crowd to serve you an inspiring taste of liquid inspiration!

Taste a treat by tazza’s own chocolatier and a period cocktail from the menu developed by Atlanta-based mixologist, Adam Fox… Don’t forget to visit vendor Calico, have your cards read by Maribeth or peek over the shoulders of artists Elizabeth Lamb and Amy Wynne Derry as they interpret the scene. In addition, please be sure to stop by and visit C.C. Acquistapace and Greg Romano for a portrait or two!

Come dressed to impress in your 1920s-40s best or evening wear. Tickets are available at an advance rate of $10 ($15 at the door) with a special VIP package of $35, which includes a private pre-show soiree (beginning at 9pm) with the entertainers, hors d’oeuvres and a cocktail, complimentary period cocktail tasting, chocolate, reserved seating, and more! Doors open at 10 for all guests and the cabaret will begin shortly thereafter.

Just keep in mind: anything goes as long as it’s over the top or under the table!

For VIP tickets, contact TAZZA at tazzatickets247@gmail.com and for general admission, visit brownpapertickets.com. Tickets are also available for purchase at TAZZA. 250 Westminster St. 401.421.3300

(Photo courtesy of the Minsky Sisters)
Posted by Loungerati at 5:10 PM No comments: 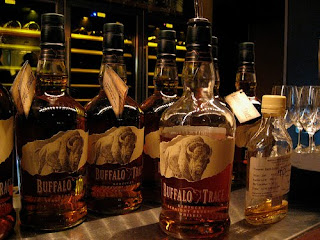 In what seems to be a trend we can all get behind, another one of our favorite saloons has secured a proprietary barrel of bourbon. Last fall, Death & Company secured their own batch of Wild Turkey, the illustrious Barrel 94. Take it from me, it was smooth.
Now the Richardson in Williamsburg, Brooklyn has their own barrel of hooch - Buffalo Trace Single Barrel Bourbon.

Joel Lee Kulp, owner and general manager, worked closely with the Buffalo Trace distillery. He and the Richardson staff sampled selections from the single barrel collection. They tasted them, voted for their favorite, and then bought the entire barrel of the winner. The shipment just arrived on January 15th. The label is bespoke and as a bonus, Buffalo Trace is even sending the actual barrel as a souvenir.

So stop by on Sunday afternoons for Honky Tonk at the Richardson and order an Old Fashioned with Buffalo Trace bourbon from their proprietary barrel. Sounds like the perfect excuse for an afternoon tipple! 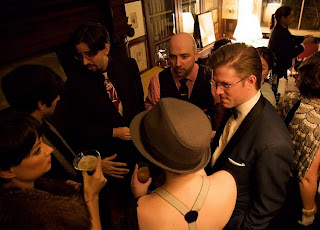 Our friend Joseph Henry Ritter, a photographer, artist, and author, attended the Salon at Players this past New Year's Eve Eve and took these great pictures. A big thanks to Joe! Happy New Year and enjoy the pics!

Some additional photos from Michael Soluri here.
Posted by Loungerati at 10:18 PM 1 comment: