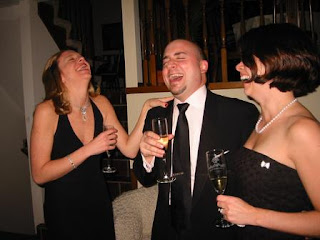 The gang at Loungerati wishes you a Happy and Joyous New Year!! The New York office will be representing at Campbell Apartment in Grand Central Station for GMT New Years then Clover Club in Brooklyn til closing time. Expect Turf Number 2 cocktails and slurred stories. Other NY members will be making Strawberry Bourbon Shakes at the Red Room, serving wankers at Pranna, and making the scene at Shanghai Mermaid.

The Kansas City office is playing up their home bar skills while New Jersey Loungerati will be cracking open homemade Rickety Old Wagon wine. Scotch will be the liquor of choice in both locations. They will be imbibing J & B Rare Scotch whiskey on the rocks and Rob Roys respectively.

Elsewhere, the Seattle office will OD on Branca Mente and lamb couscous, while our San Francisco operatives try to barnstorm Beretta in the Mission for one of their fine concoctions.

2009 looks bright, but not end of the night bright...no one ever enjoys that experience.
Posted by Loungerati at 9:06 PM 1 comment: 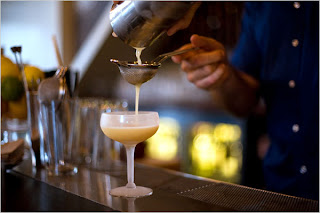 The New York Times published an excellent article in Sunday's Travel section about the up and coming cocktail bars of San Francisco. I knew I had to post it when within minutes of arriving at work, my cousin Caterina (who lives in SF) and Loungerati operative "Bacalao" who is home visiting the city by the bay for the holidays sent me the link to the article. They read it and automatically thought, "Fredo would appreciate this" - and I do.

Briefly, I went to San Francisco no less than a half dozen times between 1998 and 2002. In those years, swing was big and I'd would hit Club Deluxe, the Hi-Ball,the Orbit Room, Cafe du Nord, the Red Room at the Commodore Hotel, Bimbos, etc. I drank cocktails, lots of them but there weren't so many choices back then. We kept it basic, Manhattan, Martini, Sidecar, sometimes an Old Fashioned; see no one was serving Pisco Sours or using Carpano Antica vermouth. Unfortunately I haven't been back in a while (which my cousin often reminds me!) and now I look forward to not only hitting any remaining old haunts but the new cocktail circuit too!

Bacalao and Caterina, get thee to Beretta and have a brick oven pizza then a Dolores Park Swizzle, then the Airmail cocktail, then go have an Old Fashioned at Alembic. I want a full report! Anyone else in San Francisco, hit Bourbon and Branch or Clock Bar or Cask, let me live vicariously through you!!

(photo of Airmail cocktail at Beretta courtesy of the New York Times)
Posted by Loungerati at 8:59 PM 2 comments: 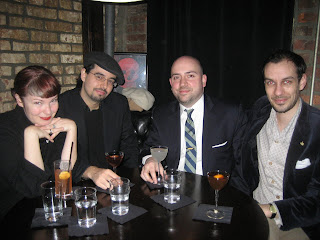 It is safe to say that 2008 has been a turbulent and surprising year. While the nation witnessed history at the ballot box and in the capital markets, we doubled our efforts and hit every joint, bar, lounge, dive, and burlesque show in an effort to spread the lounge gospel. Loungerati partnered with The Salon and JC Hopkins. We helped promote events and crafted their cocktail menus with the help of top mixologists. We continued to buck the "dress down" (aka dumb down) aesthetic that plagues our society and went out dressed to the nines. We tried new cocktails like the Silver Fizz and old classics like the Martinez (two ways on Repeal Day).

The day after the most momentous election in our lifetime, Loungerati operatives were spotted at the Chelsea Hotel hunting down the Senator (not Obama or McCain but The Senator of Kansas City). Once apprehended (stumbling and muttering down 23rd Street), he was whisked to Flatiron, Daddy-O, and Little Branch. A mini-Summit occurred and the Lounge Doctrine reaffirmed over Penicillin cocktails. A new era in lounge living seemed on the horizon.

December saw Loungerati celebrate its' second birthday on Repeal Day and make the scene at all the top lounges to celebrate holiday cheer. We didn't let the doom and gloom of the daily financial results stop our mission. Sure, our Paul Stewart houndstooth jackets maybe purchase on ebay, but that doesn't mean we cannot be civilized about it all. After all, looking like a million, doesn't need to cost a million. We proved that at Ella Lounge for Holiday Cocktails. What a perfect ending for a banner year. On that note, we would like to bring you our Best of Lounge list for 2008. These selections were hard to make but we believe they accurately capture our year:

Best Seat in the House
The "Mafia Table" at PDT
Seat F14 at Clover Club
Any Bar Seat at M & H
(Honorable mention: The "Regular" seat at EO)

Places we want to visit in 2009:
Dutch Kills (to be opened soon in LIC)
Dressler for brunch
Victoria Bar in Berlin
Tales of the Cocktail, New Orleans
Woodson and Ford
The Violet Hour, Chicago

RIP:
Grace - this bar was just one of those place that had a great Whiskey/Scotch selection, consistent food, the longest bar I've ever seen, and a proprietor (Fred M) who remembered your name even after a year. It survived 9/11 and years when Tribeca was no mans land. It closed this year and we will miss Grace. Salute!

Happy New Year!!!
Posted by Loungerati at 9:56 PM No comments: 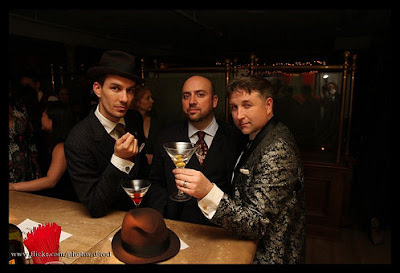 Best wishes for the holiday season from your pals at Loungerati. A special thank you to all of those who made it out to Ella Lounge last Friday for holiday cocktails. It just proves once again that neither rain, nor sleet, nor snow can keep Loungers from the bar. Let's make 2009 one to remember (as opposed to one you need to drink like the Senator to forget!) 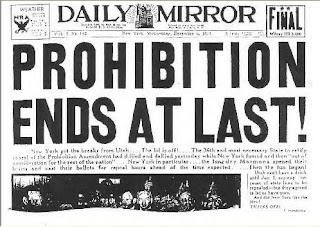 December 1933 saw a world in turmoil: The Nazis come to power in Germany; the Great Depression was in full swing; America seemed on the ropes and dry as the Mojave. The future seemed bleak, but then something momentous occurred: The peoples' representatives said NO to teetotaling and YES to civilized drinking! On December 5th, Utah became the 36th U.S. state to ratify the Twenty-First Amendment to the United States Constitution, establishing the required 3/4th of states needed to enact the Amendment (this overturned the 18th Amendment which had outlawed alcohol in the United States). Yes, even holy, rolling Utah agreed that Prohibition was for the birds.

Well, Friday, December 5th, 2008 marks 75 years since that day, and we at Loungerati are especially excited. See, enjoying decent cocktail forms one of the four pillars of our philosophy. The others being civilized attire, respectful behavior toward the opposite gender, and listening/dancing to great music that makes you say "wow". Incredibly, we couldn't have done it without Utah!

In addition, this watershed date not only has great historical importance to the cocktail-imbibing Lounger, it is also Loungerati's Second Birthday. Yes, on December 5th, 2006, I decided to make a break from the darkness that was a Lounge website called tommywhitetie.com. I reached out to fellow disenchanted Loungers who knew that website's promise to be a place where "good taste hardly goes out of style" was indeed as dead as the Sacco and Vanzetti. The place used to be a creative forum to exchange ideas, publish stories, cocktail recipes, and meet like-minded loungers. But like many good things (and no thanks to infighting and lack of leadership) the party ended. Those of us who saw the Lounge living as more than just a "singles pick-up joint" came together and formed Loungerati. As we approached our first anniversary, the Senator proclaimed the now infamous "Lounge Doctrine" at the legendary Algonquin Hotel bar. He reaffirmed it just last month at Little Branch in his beloved West Village. As we go forth into our third year, we will be branching out into a full service website and continue to partner with The Salon and other like-minded organizations and individuals to bring you Lounging, Life, and Libations - the way it should be.

Now get out there and have a few cocktails! Show 'em how Americans appreciate what Utah did! Happy Repeal Day!!

Salute and Bottoms up!