Barbarians at the gates ... 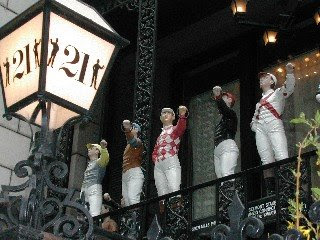 I had to read the New York Post article twice to actually believe it. In fact, it seemed like an article from The Onion, so I threw down the rag on the floor and hit the web for a double confirmation. I found it at Eater. It was true. The venerable 21 Club, one of New York's most prestigious establishments had adopted a new dress code.

"Ties are still preferred and greatly appreciated, but they are no longer a must."

The 21 Club, which opened as a speakeasy in 1922, was one of the last Manhattan restaurants that required a jacket and tie for gentlemen to eat in the main dining room. For 87 years, celebrities, politicians, the well to do, of course ordinary gentlemen and their ladies, have been making the scene at 21 wearing ties. The formality and the sense of special occasion made it a place where you wanted to get dressed up. Now it is in danger of being lost.

See I'm really pissed off at The 21 Club because they missed the point as to why business is down. The New York Post article insinuates that the reason for the policy change is less covers. However, they fail to realize that the slow down has nothing to do with the formality of a tie. No, it has to do with their price point and the tanking economy! As Bernie Madoff used to say Keep It Simple Stupid: Ridiculously high prices + recession = less business!!

For example, two items from the menu:

Those items are on the low end of the scale! Seriously, even if they get more business from the pre-theater crowd, the a la cart menu will surely keep the crowds away. You don't need an MBA to figure that out!

Instead, 21 let the Visigoth of dress down conformity across the frontier and hope he will just settle down, satiated by his new rep tie. Then the hordes will barge into "Upstairs at 21," ordering Budweiser in a bottles and the West 52nd Street restaurant will sacrifice the blazer hoping they go away. Then the Vandals will be across the threshold of the Bar Room, clad in distressed denim and sneakers. By then it will be too late, for the barbarian of comfort dress will be talking loudly on his cell phone throughout dinner and watching "the game" on the club's new flat screen. His date sitting ignored, his shirt untucked, and the magical place that was The 21 Club relegated to antiquity.
Posted by Loungerati at 9:00 PM 3 comments:

Finally, a President Worth Having a Beer With... 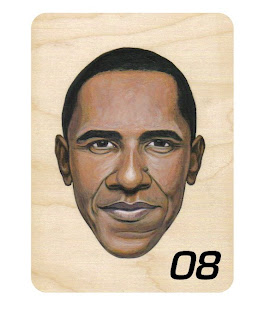 This is a watershed moment. That is clearly stating the obvious. But folks who hang in cocktail bars are often guilty of that kind of speak, so give us some latitude.

Today is really special and inspirational. Mr. Barack H. Obama will be sworn-in as the 44th President of the United States of America. Millions of people will pack the Capital in the frigid cold waiting for the moment when he takes the Oath of Office, his hand on Abraham Lincoln’s bible, truly symbolizing how far we have come: from Emancipation to Inauguration.

Today we also say "Adios" to George W. Bush, a President with whom most Americans once said they would happily share a beer. Well, Georgie may have been a good time swigging a beer or two, but by the end of the night he became “that guy”. That guy who hit on your girlfriend, knocked over the coffee table, put you in a headlock, made inappropriate comments about your gay cousin, and naturally, toilet papered your trees! That guy who plowed his BMW across your lawn and crashed into your garbage cans as he drove off into the night. We say "Godspeed - and please get a designated driver."

Today, we have a new President, a President who is as at-home having a beer in the Billygoat Tavern under the El on Michigan Avenue over some “cheezeburgers, cheeseburgers”, as he is sampling the cheese course and a Barolo at Spiaggia, Chicago’s only four-star restaurant. Barack is a guy you can go and watch a baseball game with in the stands; he is not that guy who owns the team watching from a skybox. Barack is a guy you can go listen to jazz with at the Lenox Lounge, or watch the Knicks play the Celtics courtside at Madison Square Garden. He is a transcendental figure who is invited to share a wet one with us anytime, because we know he is level-headed enough to call it a night before we hit Arthur's Tavern for after-hours.

Today, Mr. President, the baton is now in your hand. You have our undivided attention and we are ready to serve. To kick it off, Loungerati men and women in New York will be trading their suits and dresses for jeans and t-shirts this spring, to give our time to the Prospect Park Alliance in Brooklyn. Giving back to the community where one lives is democracy in action. It is only one of many projects to help our country. We hear what you are saying and it is time to move beyond the barstool.

Oh, and Mr. President, one final note: if you are ever in NYC and want to grab a proper drink between U.N. visits, let us know. We are kind of experts at that sort of thing.

Hail to the Chief!

- The Loungerati Executive Board
Posted by Loungerati at 10:12 AM 3 comments: 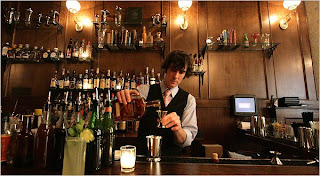 News from our pal and maestro Michael Arenella:

Join us at Smith Street's swankiest "Speak", from the proprietors of Manhattan's fabled Flatiron Lounge. Champion, well-groomed bartenders will stir up your favorite old-time cocktails, whether it's a Ramos Fizz or a real Whiskey Sour.

Fresh bitters, black cherries, and even the long forgotten essential ingredient to a true cocktail, the egg, are among the charms to be found.

Tasty gourmet bar food menu.
Cozy up with the Quartet in a handsome leather booth, for Brooklyn's most sublime evening out.
(Room to dance, but keep it a secret.) 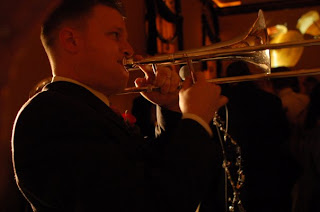 Join us at The Salon at Galapagos Art Space

Featuring 2 sets of the one and only
J. WALTER HAWKES QUINTET
w/ special guest TODD LONDAGIN

BELLY DANCING
Fresh off the stage from the Metropolitan Opera's
production of Thais - ZAHRA HASHEMIAN.

$15 - Cash at door or with credit cards online, in advance.

for more info and advance tickets go to:
http://www.thesalon.biz

(Photo courtesy of Michael Soluri)
Posted by Loungerati at 11:33 PM No comments: