Don't get passed over!! Try the Godfather 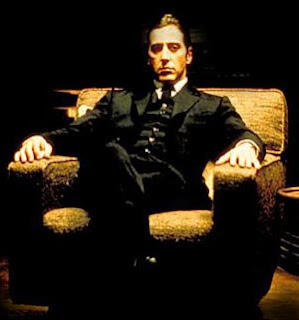 In December, my wife and I hosted our annual holiday cocktail party at the Brooklyn apartment. Keeping with tradition I bartended and served Italian inspired cocktails such as Negronis, Limoncello Martini, etc. One of our guests, a dear friend, showed up with a bottle of DiSaronno Amaretto liquor instead of an Amaro. Of course, the jokes started flying fast. There was a almost a DiSaronno ice licking contest at the bar a la the infamous TV advertisement with the gorgeous red head! The girls - already tipsy drinking neapolitan Blood Orange Bellinis - began boasting of their ice licking prowess. Unfortunately, the contest never happened - the ragazze polished off a bottle of Limoncello instead! So I put the DiSaronno under the bar since I usually do not drink Amaretto, I find it too sweet. However, its presence at my home bar peaked my interest. What kind of cocktails could one make with the almond flavored liquer?

I consulted the "Good Book" aka ubermixologist Dale DeGroff's The Craft of the Cocktail. I found a cocktail that was right up my alley - The Godfather! This cocktail calls for equal parts Scotch and Amaretto. To my surprise, the Scotch was complimented by the Amaretto in a manner reminiscent of a Rusty Nail. I also added a lemon peel to cut the sweetness of the Amaretto and to give the drink a true Sicilian flavor.

Pour over ice in a rocks glass, and stir. Then drink to the last drop and refresh! 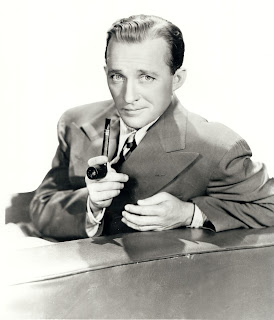 If you love America, freedom, white teeth and booze, then don’t miss a single episode of “Johnny Bourbon, Crooner Detective” starring Bing Crosby and the Merriam Sisters! (Sponsored by Farnsuckle Toothpaste…the toothpaste hated by Nazis and favored most by Cary Grant and Orson Welles.)

Written, conceived and produced by Matt Scott and the Senator

Starring (in order of appearance:

Lounge Essentials: Come back anytime ...with the hat 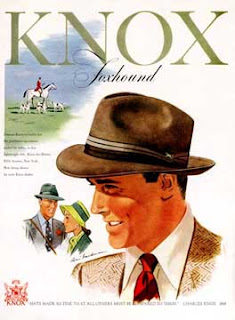 A few weeks ago, I was running some errands in Manhattan. The list of things to do included buying a new winter paper boy cap, meeting my tailor for a fitting, and getting a buzz and straight razor shave at Freemans Sporting Club. In between, I stopped for a dozen oysters and a carafe of Muscadet at Balthazar because I was hungry, know what I mean? But let's rewind to the new hat part of my journey.

I went to Arnold Hatters on 8th Avenue and 37th Street because that is my first and usually only choice when purchasing a new lid. For vintage hats, I go to an undisclosed location in Carrol Gardens. Now as everyone knows, Arnold HattersKnox Hats store. The owner told me the store had been in the family since then, so as I was buying my new brown/orange/beige hounds tooth wool lid by Stefano (made in Italy), I decided to show him my vintage fedora (bought at my secret find in Brooklyn). used to be located across from Port Authority in the old

The fedora is a Knox Hats original, brown felt, with black band from the late 1950s/early 60s. It is practically dead stock with perfect lining, and strong brim. The owner of Arnold's took one look at it and called over his son.

"They don't make them like this anymore. Look at the craftsmanship."

He then asked if I minded if he brushed it for me and offered a complimentary hat steaming. I told him to go right ahead and he meticulously brushed the hat and steamed the sides to open it up.

"What a beautiful hat, you know how much a hat like this would cost today..$200 easy!"

His attention and caring was a sight to behold and almost brought a tear to my eye.

Once I got the fedora back and swore an oath to keep it pristine, he told me: