Last week, I attended the Bärenjäger national bärtending competition at Macao Trading Co. in New York's Tribeca section. Participants were asked to create an inventive cocktail using the honey liqueur. Almost 200 entries from all over the country were received but only six chosen for the finale. First, the contestants mixed their cocktails for the invitation only crowd. Once the thirsty mob was well tippled, the they had the nerve wracking job of presenting to the judges.


Judging the competition were an all-star line up of spirits experts including Allen Katz of Southern Wine & Spirits, Gaz Regan of ArdentSpirits.com, Dushan Zaric of Macao Trading Co./Employees Only, Tad Carducci of the Tippling Bros and tequila-phile Phil Ward owner of Mayahuel.

The Prizes:
1st place - an all-expense trip paid for two to Oktoberfest 2010 in Munich, Germany and $1,000 spending cash. Judges based scores on taste, appearance, creativity and overall delivery.

I also submitted a recipe which is a damn good cocktail, simple, and refreshing.

The Luna di Miele (Honeymoon in Italian) is a cocktail that marries the complex anise vanilla flavor of Galliano with the smokiness of reposado tequila and sweetness of Barejager honey.

Dry shake all ingredients, then add ice and shake rigorously. Strain into  chilled coupe and garnish with a star anise.

Full picture recap at Guest of a Guest.
Posted by Loungerati at 9:22 PM No comments: The scene of the crime is Ella Lounge, down Avenue A in the East Village. After an opening salvo of cocktails at Death & Company, I duck in to check out Matthew Piazzi and Debonairs sing doo wop hits of yesteryear.

Ella is packed this Friday night. The main room which is reminiscent of a Hollywood club is filled with a mix of pork pied regulars, doo wop aficionados, East Village hipsters, and special guests. Celebrities are there the too. Page Six staples Penn Badgley and Blake Lively plus their entourage trade in bottle service for a ride on a time machine. Next stop 1958.

Matthew Piazzi is the  ringleader of this sharkskin pack. His haircut slicked into a tight pompadour. His dinner jacket is egg cream white and tailored to show a healthy dose of cuffs. He grabs the vintage chrome micro phone and pulls his George Raft-esque frame up on the bar. He starts singing  Dion and the Belmonts' classic "Run Around Sue" as he advances down the bar. He swaggers Elvis style, the crowd swoons. He croons, the crowd cries out for more.

The Debonairs are not just background either. George Ellington and Scout, Piazzi's backup singers often steal the show with renditions of 1950s anthems like "Stand By Me". Meanwhile Luigi "Babe" Scorcia, actor, impresario, and bad ass on the electric guitar struts around in his sharkskin suit and tinted sunglasses. The whole scene is spot on and plain old fun.

Could this be the beginning of a Neo-Doo Wop movement? We certainly hope so.

Matthew Piazzi and the Debonairs perform at Ella Lounge every Tuesday and Friday.

Oh and the cocktails ain't so bad either. Try the Clark Gable (Bourbon, Lime Juice, Muddled Ginger, and Cherries). 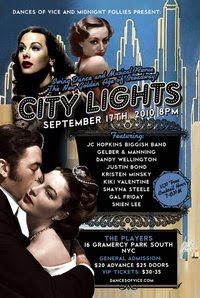 Loungerati's own Fredo will be mixing up an Autumnal Punch for the VIPs at tomorrow night's Dances of Vice & Midnight Follies "City Lights" show at the historic Players Club. The punch is complimentary for attendees with VIP tickets. The line up is terrific with the likes of vaudevillians Gelber & Manning, naughty burlesque non-conformist Kiki Valentine, and the ubiquitous Dandy Wellington to name a few.

As the mighty DUTCH KILLS transitions from their Summer cocktail offering to an eagerly-anticipated (and much extended) Fall menu, they have for the time being replaced their back-bar presentation with a short piece written by Graeme Jamieson, one of our contributors.

Here, where the air is cheered and being fair
Seconds live in High-Spirits;
An hour please of your time
Fond find your fortune leavening
- Caught the sun on your neck
And in mirrored walls, Look!
Match light in your eyes
Splash me a toast, here we are!
To heart shaped leaves
Winning personal bets
And faring as well as you this season!

Try the new Autumn menu and some of the best hand crafted cocktails in New York. You are sure to run into our bar stool poet.

Dutch Kills
Posted by Loungerati at 9:58 PM No comments:

For over a decade, New York Loungers have been making the two block stretch of West 44th Street between Broadway and Fifth Avenue a cocktail destination. The midtown hotel row is home to  iconic hotels like the Algonquin Hotel, which gained fame as the weekly meeting place for the literary clique known as the Algonquin Round Table  (aka the "Vicious Circle") from 1919 to 1929. Notable journalists, writers, actors such as Dorothy Parker and Robert Benchley held court. In that vein, the Dorothy Parker Society's annual Parkerfest (recently held during the last week of August) features an Algonquin Round Table walking tour that ends with Friday happy hour at the hotel to honor the late poet and satirist. Loungers and Roaring Twenties aficionados dress in their finest attire and drink period cocktails.

West 44th Street has been the site of many hotel bar crawls. In November 2007,  a crew of loungers began the night at the King Cole Bar at the St. Regis Hotel on East 55th Street. After a seasonal cocktails, we made our way down to the Iroquois and finally the Algonquin Hotel's Round Table Room.  The Senator seized the opportunity and understanding of the venue's history by issuing the now infamous Lounge Doctrine. Toasts were made with a round of eponymous Algonquin Cocktails (Rye, Noilly Prat dry vermouth, pineapple juice, cherry).

On Wednesday nights, the Emmy winning trombonist J.Walter Hawkes and his jazz trio perform at M Bar in the Mansfield Hotel.  The mixology at the M bar requires customer guidance and drinks are a bit pricey. However, the half-moon shaped bar and library like setting make it a wonderful place to enjoy a drink, especially in the winter. M Bar's intimate setting spawns many conversations and perfect evenings while J Walter Hawkes and surprise guest musicians provide the soundtrack..

Tradition and classic hotel bar elegance aside, the cocktails served on West 44th Street are poor quality compared to the ridiculously high prices charged. Typically, we resort to drinking beer, wine, or a single spirit neat (bourbon, scotch, etc). Well friends, I have momentous news to report: The fine art of mixing drinks has returned to West 44th Street thanks to a new breed of Hotel bar.

The Bar at the Lambs Club just opened at the boutique Chatwal Hotel. What is old is new again, the Lambs Club was America's first theatrical club. The original private society was located at 130 West 44th Street  moved to further north to 51st Street in 1974. The Chatwal Hotel's  restaurant bar is at the same location and hence the name Lambs Club to honor the initial tenants. In this incarnation, the club has a distinct mid-century theme with red leather deco booths, a blazing fireplace, and bartenders in white jackets. Why are we excited about this new bar? Sasha Petraske of Milk & Honey is behind the cocktail menu.

(Currently open for breakfast and lunch, full dinner to be added in mid-September)

In late September, the return of the classic cocktail parade will continue at the Forty Four at the Royalton Hotel. According to Grubstreet, the management behind Brassierie 44 are renovating the space and brought in a veritable All-Star team of mixology talent to come up with the cocktail program to fit the vintage theme. Among the heavy hitters , our friend Richard Boccato (Painkiller - NY), Eric Alperin (The Varnish - LA), Misty Kalkofen (Drink-Boston), John Lemayer (Florida Room - Miami), Willy Shine (Contemporary Cocktails), and Simon Ford (Beefeater/Pernod Ricard). The artisinal cocktails are sure to run the range from classic to creative with an emphasis on quality ingredients. We know going in that cocktails are expensive at any hotel bar, now at least one will get what they pay for.

Other worthy landmarks and destinations on the street - City Club Hotel (55 W 44th St) - home of DB Bistro Moderne and the Iroquois Hotel.

So, as the chill returns to the air, the days get shorter, and autumn leaves fall from the heavens, make sure to take a trip to West 44th Street to warm your soul. See you there!
Posted by Loungerati at 10:52 PM 2 comments: