Joaquín Simó (Tales of the Cocktail American Bartender of the Year, 2012) partners up with Toby Maloney (Alchemy Consulting), Troy Sidle and Jason Cott to open up a new East Village cocktail destination. This collaboration has been hotly anticipated by cocktail lovers who flocked to Death & Company for Simó's drinks.  Joaquín brings his signature attention to detail and D&C tradition of layering flavors to his new boite Pouring Ribbons. Maloney (a Milk & Honey and Pegu Club alum) and company bring an impressive record of opening award winning operations like Patterson House (Nashville) and Violet Hour (Chicago). Needless to say, with this pedigree, Pouring Ribbons could quickly rise to the top of New York's cocktail pantheon.

The entire bar is on the second floor above a liquor store at 225 Avenue B near 14th Street. When we rolled up, there was a ear piece totting doorman who on door control duty. After two unsuccessful attempts to radio upstairs to check capacity, he cried UNCLE and sent us up. I expected a D&C style wait and was pleasantly surprised for the easy access. Up the stairs, we entered an airy 88-seat bar with a curvy wood bar, and plenty of banquette and table seating. There was more of a saloon vibe to the place which is a nice departure from the standard speakeasy motif. A smiling hostess greeted us, asking our preference for table or bar? One can stand in the bar space at Pouring Ribbons, so we chose that option until a seat opened up. We wanted to see Joaquín at work and got quite a show.

The cocktail menu is succinct and simple which is a nice departure from the encyclopedias handed out at some bars.  The menu is divided into two main sections, classic drinks made to your preference (negroni, manhattan, mai tai, etc) and 15 house cocktails. According to Simó, the best selling house cocktails are a delicious concoction called Death &Taxes (Dorothy Parker Gin, Lemon, Clear Creek Blue Plum brandy, Lavender-infused Cinzano Bianco, acai honey syrup, grapefruit bitters) and the Dueling Banjos (Weller Special Reserve Bourbon, Lemon, Eagle Rare Bourbon, Pierre Ferrand Dry Curacao, and Coconut milk). My favorite, The Death & Taxes, was reminiscent of an Aviation cocktail but with a layers of floral and fruit flavors from the brandy and infused vermouth. The Dorothy Park American gin was definitely prominent and overall the drink has a thirst quenching feel to it.

The house cocktails are expected to change seasonally so expect lots of exciting variations on classic and new favorites. The ice program here is serious too, with hand carved blocks and cylinder shaped pieces fitting snug in elegant glassware. Even the garnishes were artistic with grapefruit peels cut into the shapes of lips. It is noteworthy to add that these extra touches of fancy did not come off as ostentatious given the general welcoming and egalitarian feel of Pouring Ribbons. There are also small plates available (Beecher's gourmet cheese, charcuterie platters, and other delectable tidbits) and the wine and beer selection is top notch.

No reservations, no dress code, come as you are, and enjoy yourself.

9/11 Remberance: We Honor Windows on the World Staff and The Greatest Bar on Earth 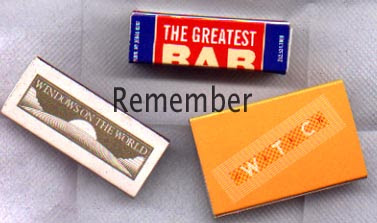 New Yorkers and all Americans remember with choked up feelings when we read the names of the fallen, especially the names we know. Loungerati takes this opportunity to salute the 76 bar and restaurant workers at Windows on the World who lost their lives that fateful Tuesday morning in September. They were part of the working class ordinary folks who make New York City great. We also lost a place called the Greatest Bar on Earth which provided us with so many memorable experiences.

The Greatest Bar on Earth ("GBOE"), which occupied the 107th floor of the North Tower, hardly lived up to it's name. Nevertheless, it was home for metro area Loungers every Friday night during the late 90s and early 00s. Sure, when you ordered an Old Fashioned you may get a concoction mistakenly made with Worcestershire sauce in lieu of Angostura bitters, but we would assist when necessary and always leave generous tips. When a swinging band like Jet Set Six were playing or the vanguard burlesque act The Pontani Sisters teasing the crowd, the place was pure magic! We loved GBOE and during our last visit on August 25, 2001, we enjoyed the Louis Prima stylings of the Ray Gelato Giants from London. GBOE was a standard on the neo-swing, lounge, and jazz circuit. It was a place we would go to warm up for the Supper Club later in the night. Loungers from that era continue to miss the GBOE wholeheartedly and the community it created. More important than any establishment, we honor the wonderful folks who made the trip to the top of the tower so unique and are sadly gone.

Email ThisBlogThis!Share to TwitterShare to FacebookShare to Pinterest
Labels: 9/11, Greatest Bar on Earth, Remembrance, Windows On The World

What We're Drinking: The Negroni Bianco


Etiquette deems that one cannot wear white after Labor Day but there is no mention of white cocktails being verboten! Let me introduce you to the Negroni Bianco or “White Negroni”, a perfect drink for the transition to Autumn.

For years, I would request a White Negroni at select New York cocktail destinations when by chance I saw a bottle of a coveted French bitter aperitif called Suze on the shelf. I would only ask if the bartenders or bar owners were friends. I held no ill will if they refused to dip into their super secret stash of Suze to accommodate me. This liqueur was not available in the United States and bartenders in the know smuggled it in the country on return trips from Europe.  So, it was pretty special to have one given the limited supply of Suze.

“British Cocktail King” Wayne Collins created the White Negroni in 2002 and leveraged the Negroni lighter sister ingredients by using gin, Lillet Blanc (a French fortified wine), and Suze. Lillet took the place of sweet vermouth, while Suze replaced Campari in the classic Negroni formula. The proportions were modified from the classic equal parts recipe by increasing the gin to a full jigger. I believe this was done to counter the complexity and earthy tones of the Suze.  In my adaptation, I have swapped out London Dry gin for an American Navy Strength gin, and returned the proportions to equal parts. I also use Dolin Blanc vermouth in lieu of Lillet Blanc, because Dolin Blanc at its core is a sweet vermouth. I stuck to the original lemon peel for garnish since I think Collins had it right regarding the lemon oils. I have made this drink with orange peel too; it is delicious and the orange peel is more like a traditional Negroni.

Perry’s Tot Navy Strength Gin (57% ABV) - As with the classic Negroni, the bianco version requires a gin with the fortitude and depth to stand up the robust flavors of the bitter and sweetness of the vermouth. One could go with a classic London Dry gin such as Beefeater, but I prefer to up the ante and the proof of this libation. So I went with Perry’s Tot Navy Strength Gin from the New York Distilling Company.

Distiller Allen Katz honors 19th Century American Navy legend and former Commandant of the Brooklyn Navy Yard, Matthew Calbraith Perry with this classic navy strength gin. This variety of gin distilled at 57 % ABV which is the historical proof at which gunpowder might still be fired should it unfortunately be soaked by spilled spirit. Katz also tips cap to the Navy tradition by referencing the standard gin ration measurement or “tot” (roughly 1 oz) provided to British Commonwealth sailors during the 1800s.

Weighing in at 114 proof, Perry’s Tot not only stands up to the Suze’s complexity, it is also chock full of bold flavors. Besides the traditional signature botanicals such as juniper, citrus peels, and cardamom, Perry’s Tot is also infused with wild honey flower. This recipe results in a clean juniper taste with both subtle and intense flavors of citrus and spice.

Suze (20% ABV) is a French wine-based liquor whose prominent flavor is yellow gentian root. It is considered part of the “bitter” family and has been continually produced since 1889. Artist Pablo Picasso was so inspired by the spirit that he memorialized it in his 1912 "Verre et bouteille de Suze." The impressive history aside, Suze has been a precious commodity to drinks aficionados since Wayne Collins put it on the cocktail map with his White Negroni. It was not available in the United States – until now!

For Suze's U.S. launch, the manufacturers resurrected creator Fernand Moureaux’s original 1885 recipe. Much like Lillet, modern day Suze has been modified to accommodate the modern consumer tastes. So the bitter or quinine taste profile was lowered and sweetness increased. However, Pernod-Ricard (owners of Suze since 1965) are big supporters of the craft cocktail movement. They understand the demand for authenticity when it comes to flavor profiles from specific eras. The original formula and name of the newly available spirit is Suze Saveur D’Autrefois - which translates to “old flavor”.

The Suze Saveur D’Autrefois is now available in the United States and distributed by Domaine Select. It retails at about $30-35 for 1L bottle.

Dolin Blanc Vermouth (16% ABV) - Maison Dolin et Cie produces a premium brand of vermouths from the alpine Chambéry region of southeast France. Vermouth de Chambéry has also received the appellation d’origine controlée (a.o.c) certification due to the unique characteristics of the soil of the area. The Blanc is produced like un-aged sweet vermouth that is infused with 54 plants and herbs that includes rose petals but none of the ingredients that create the red color. It is a more thoughtful variation of the mass produced bianco vermouth but with the unique aromatic vegetation of Chambéry.

Domaine Select also imports Dolin vermouths, which have a very economical price point of $16-20 for a 750ml bottle.

If you do not have access to Suze Saveur D’Autrefois yet but want to enjoy a White Negroni, I recommend Grand Classico Bitter or Bittermens Amere Sauvage - Gentiane Américaine as a worthy substitutes.

Method: Combine vermouth, Suze, and gin in a mixing glass. Add ice and stir until well chilled. Strain into a cocktail glass or coupe, garnish with fresh lemon peel.

Where to drink this cocktail: The Shanty (79 Richardson Street, Brooklyn) and PDT (113 St. Marks, East Village)