End of an Era: Arnold Hatters Closes for good 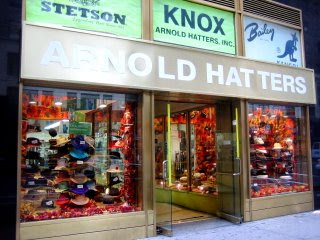 "Much is said by what you wear on your head"

It is with great sadness that I report the closing of Arnold Hatters (aka Knox Hats) in Manhattan. Arnold's was more than just a hat store. It was an affordable alternative to Fifth Avenue hat specialists JJ Hatcenter and Borsolino whose hats can cost upwards of of $1,200. They were happy to work with you to find the right hat for your budget and even went the extra mile to steam a fedora for free as I talked about last year. Arnold Hatters was my hat store. It's former incarnation, Knox Hats, was my Grandfather's hat store. According to the blog Vanishing New York: "Arnold Hatters, also known as Knox Hats, which had been at 620 Eighth Avenue for more than 40 years and whose owner (Arnold Rubin) could trace his Times Square hat-selling lineage to 1926." The post goes on to discuss how eminent domain was used by City of New york to take the original Knox Hats space. The Rubins were forced to move a few blocks south to 8th Avenue and 37th Street in 2007 but the volume of business fell off. The drop in sales (despite hats coming back into fashion)due to displacement coupled with the recession was too much for the 83 year old business, this May Arnold Hatters closed its' doors for good.

"To all of our dear friends and customers,

Due to the worsening condition of the economy, we have had to close our doors and go out of business. We're very grateful for your patronage over the years.

God bless you all,

Thank you for the countless hats, education, class, and tradition. I will miss your store, the banter, and your dedication to the craft. I wish you the best in these tough times.Godspeed!

(Photo by Vanishing New York)
Posted by Loungerati at 12:33 AM