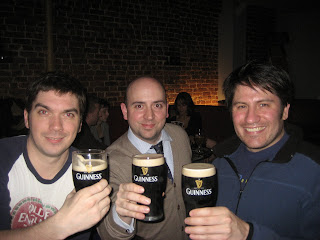 by Fredo
Conker Hill, our favorite Irish pub in New York City, served their last pints of Guinness last Saturday night. Kieron St. Ledger, the publican, was forced to close the pub due to the terrible economic times that have squeezed small businesses like Conker into the pages of history.

Conker Hill was a relaxed neighborhood bar that featured darts, Big Buck Hunter, bands, comedy night, the Dewar's Repeal Day party, trivia night, and more importantly - a friendly crowd that checked any pretense at the door. It was off the beaten path, on 10th Avenue but worth the trek.It was a place where you ordered a beer, and by the end of the night a shot was sure to come your way.

We had a fantasy baseball league meeting their every March and geeked out while picking MLB players. Kieron would open up early just for the event. Each participant would await their turn, pick an available player, and then would put the name on a big leader board set up in the bar. There were cheesesteaks and plenty of trash talk in the air. To celebrate the opening of the baseball season, the gang would gather for a "meatfest" at the Argentine restaurant Churrascharia Plataforma in Hell's Kitchen. It was a bunch of guys getting together, bonded in friendships formed over pints at Conker Hill, and sealed in a love of baseball.

I will miss Conker Hill but I am glad of the friendships I made and I take them with me in the go cup of life.

Good luck to Kieron and his family. KSL, I hope to see your smiling face behind the stick of a new pub sooner than later. I mean what could possibly go wrong?!
Posted by Loungerati at 8:03 PM