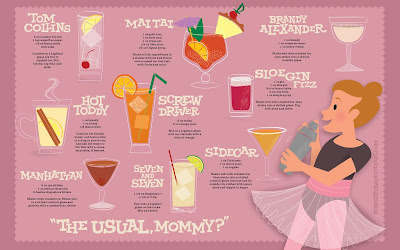 AMC's Mad Men begins it's fourth season on Sunday July 25th. The year is 1964, Don Draper and company have resurrected Sterling Cooper, Betty Draper has flown the coop, and many more surprises are in store. In anticipation of the premier night watch parties that will be popping up across the nation, the folks at AMC have come up with a retro cocktail guide of 1960s cocktails.

This guide includes the usual suspects such as the Classic Martini (but sadly suggests vodka instead of traditional gin), Manhattan (with bourbon not rye), the Old Fashioned (fruit salad style with bourbon), Mint Julep, Tom Collins, etc. There are many mistakes in their recipes and whole genres are missing. Besides the technical errors in building some drinks and incorrect base spirits, there are also some bizarre selections. For example, The Pink Squirrel (creme de noyeau, creme de cacao, vodka, heavy cream) and the Dirty Martini (vodka, olive brine, dry vermouth). Are these really vintage 1964 cocktails?

According to Gary Regan's The Joy of Mixology, the Pink Squirrel first appears in a 1966 edition of Old Mr. Boston (a bartender's guide) and "was still going fairly strong in the mid-seventies." No vodka is used in the recipe from Regan's book which is equal parts creme de noyau (an almond flavored pink liquor),  white creme de cacao, and heavy cream. I doubt that this libation was popular enough at the time to be included in AMC's guide.

The Dirty Martini is rumored to have origins dating back to Franklin D. Roosevelt. However, the drink did not become ubiquitous until the mid-1990s. It was the male version of the Cosmopolitan. I certainly would not classify it as a true early 1960s cocktail, more like something Vince Vaughn would have ordered in Jon Favreau's Swingers.

Further, the cocktail guide has some glaring omissions. Most obvious, rum is not a base spirit in any of the cocktails in the guide. To me, this astonishing because rum was so common place at the time. Where is the Daiquiri? Where is the Cuba Libre? Did Americans boycott drinking Daiquiris in the early Sixties as a response to the Cuban Revolution? If so, why does the White Russian (which is included in AMC's guide) seem to"survive the anti-Soviet tensions."Dude!!!

What about Tiki? The Mad Men era was during the golden age of tiki cocktails with Trader Vic style bars in every city and town. At a minimum, I would have expected the Mai Tai to be on this list.  Instead, we get no Mai Tai. No Zombie. No Fog Cutter. No Tiki!  Once again rum is forgotten.

An Alternative
I think artist Dyna Moe captured the pulse of true Mad Men cocktails more than AMC's crack blog team. She actually did research in creating the illustrations in her Mad Men Illustrated series. Dyna's "The Usual Mommy?" piece takes inspiration from the kitsch cocktail menu/place mats that were so popular at bars and restaurants at the time. These place mats had an image of the drink, plus the recipes to make each one. She gets the cocktails of Mad Men correct and includes the Mai Tai, the Side Car, Seven and Seven, Tom Collins, Sloe Gin Fizz, the Manhattan, Brandy Alexander, and Screwdriver. 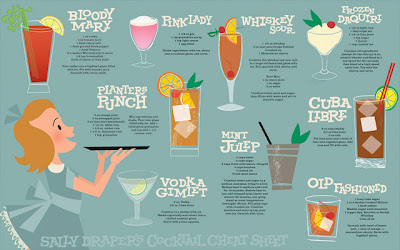 Oh and skip the Pink Squirrel until Sally Draper mixes one for Mommy.