What We're Drinking: Benedictine - from Monte Cassino to the Cinquecento 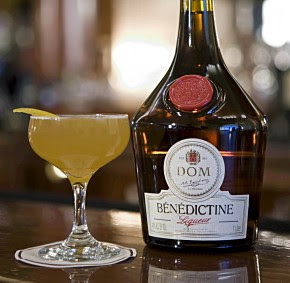 Last month, barkeeper Damon Dyer's Monte Cassino won critical acclaim and the title of official cocktail for the 500th Anniversary of DOM Benedictine Liqueur. I caught up with Mr. Dyer at the Flatiron Lounge on a slow Friday night. He began rolling the award winning cocktail as soon as I sat down and we discussed how he came up with the winning recipe.

To appreciate the cocktail's building blocks, one must understand history. Mr. Dyer chose the ingredients and the name based upon the story of the Benedictine monks of the Abbey of Monte Cassino. The monastery located southeast of Rome was founded by St Benedict of Nursia in 529 AD. Yes - the Saint Benedict who went on to establish the eponymous order of monks. The same Order that produces DOM (Deo Optimo Maximo) Benedictine liqueur.

The monastery served as the headquarters of the Order of Saint Benedict and history has not been kind to the structure or it's inhabitants.  It was sacked and destroyed several times during the middle ages by marauding invaders, such as the Lombards and the Saracans. The monks rebuilt it again and again. In 1321, an  earthquake seriously damaged the structure but still the monks rebuilt. The coupe de grace seemed to occur during the Second World War when the abbey was destroyed by the Allied bombers in 1944. However, the Monks' faith and determination to rebuild remained unwavering.

Strength and simplicity are central to the monks lives and the perseverance behind Monte Cassino. These principles are the cornerstone to the cocktail's balance. Rittenhouse Rye (Bonded) is the perfect representation of that strength and compliments the complexity of Benedictine's 27 herbs and spices. Yellow Chartreuse another monastic produced liqueur keeps the "Last Word " proportions honest but also adds another layer of flavor and balances the final ingredient, fresh lemon juice. The result is a well balanced cocktail is refreshing, produces a subtle earthy flavor, has the strength of serious cocktail, and is relatively easy to execute.

Combine in shaker, add ice, and shake until stingingly cold. Strain into a coupe and garnish lemon peel.

While, Mr. Dyer built my second Monte Cassino, I ran a drink idea by him. Since reading about the 500 year anniversary of DOM Benedictine contest last year, I have been tinkering with my own recipe that honors the liqueur but also tips the trilby to the iconic Italian macchina, the Fiat Cinquecento ("500" in Italian). In other words, DOM meets MOD, a drink that you could have in Torino or West London or Brooklyn. May I introduce a delicious new aperitivo!


THE CINQUECENTO
by Fredo

Combine in bar glass, add ice, and shake rigorously until chilled. Double Strain into a coupe and garnish with grapefruit peel.


(Photo courtesy of Liquor.com)
Posted by Loungerati at 8:29 PM