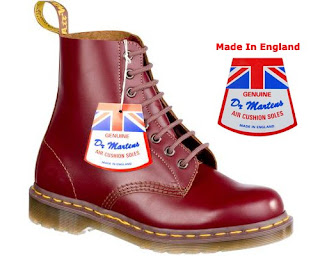 The trip to purchase my first pair of classic Doc Martens leather boots involved hiding money in my socks, extreme paranoia, and an exit plan. The year was 1988. The only place worth getting a pair of the air cushioned rubber soled 8-eye Oxblood colored boots was a store called 99X in New York's East Village neighborhood. The East Village in the late 1980s was a sketchy place and not the gentrified college campus of today.

My strategy was to go early, when the place opened, buy the "Docs", and run like hell back to Astor Place subway station. There were rumors of Skinheads camping out in front of the store or hiding in dark stairwells down the block near Fourth Avenue. They would mug kids buying Dr Martens boots at 99X. This of course was urban legend but as far as my 16 year-old mind was concerned it was real. In fact, some girl I met at the Cure Concert  heard it happened to a friend of a friend -  so it had to be true!

99X was the only game in town at the time when it came to cool British apparel like Fred Perry, Ben Sherman, football scarfs, braces, skinny ties,  and of course the must have DM boots. My junior year in high school was starting the following week and I had saved money during the summer just for this event. I had to have new Docs for the first day! So I ventured down to 99X on East 10th street between 3rd and 4th Avenues wearing running shoes.

Well the worst that happened at 99X was the coveted oxbloods were out of stock. So, I decided to settle for the regular black Doc. There were no skinheads or punks outside, the street was empty. The only human contact I encountered was a disinterested store clerk reading a fanzine.  I remember Iggy Pop was playing on the PA. Luckily, the black boots in a UK size 9 (a US 10) were in stock and they fit perfectly. I opted not to get steel toes which were more expensive and a bit too  "New York Hard Core" for me. I was more of a New Waver dude.

The mystique behind the boots is not only the iconic yellow stitching around the sole or their cool factor. It is the comfort. The difference is the  air-cushioned sole, which is oil and fat resistant, tough as nails, and practically slip proof. The original craftmanship still endures, the upper and sole are sewn together, not merely glued like other boots. Doc Martens' patented "Z welt-stitch and heat-sealing process" ensures a life time of durability making it a true working class rugged boot.

This year marks the 50th Anniversary since the first hand crafted Dr. Marten boots rolled off the Cobbs Lane factory assembly line on April 1, 1960 in Wollaston, England. Since then it has been the signature footwear of the British working class, then Skinheads, Rude boys, New Wavers, Punks, and eventually even Mall Rats

Vintage 1460 Oxblood Quilon boots ($180), a direct replica, of the very first boots are now available. They feature "narrower horizontal tread bars, criss-crossed coring bars, a darker sole, a storm welt bound together on the lateral side, small indentations left on the welt by the original stitching machine, no top collar binding and runs into the eye stay above the top eyelet."

My original pair of black boots went to the Salvation Army ten years ago, which means only one thing - I am buying a pair of the replica Vintage 1460 Oxbloods!! It is about time! Oi!