What We're Drinking: Do the Dutch with Bols Genever cocktails 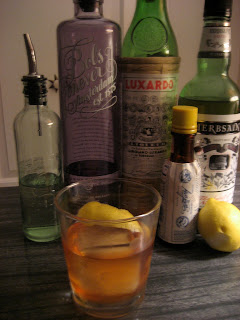 The recipe for Bols Genever (the preeminent brand of Holland Gin) was created in 1820. Lucas Bols, the Dutch producer of Bols Genever, which has been distilling spirits since 1575 launched the modern version of this product in 2008. Since it's launch, Bols Genever has one numerous awards and has been adopted by mixologists from coast to coast. It is particular popular in punches and recreated of 19th century cocktails a la Jerry Thomas.

Bols Genever is made by triple distilling 50% malt wine and neutral grain spirits, then infusing juniper and natural flavors. It has a robust flavor profile with the malt and juniper balancing each other. It does not taste London dry gin, which should be pointed out to people who "hate gin." In fact, Holland gin is reminiscent of a whiskey and is delicious neat, in sours, or mixed drinks.

According to spirits historian David Wondrich's book Imbibe!, Holland Gin, or Genever, was the only variation of gin that Americans drank  or even knew for most of the 19th century. Six times as much Holland gin was imported than it's British cousin. It was only in the period leading up to the fin de siecle that London Dry Gin became the predominant juniper based spirit. So one can surmise that the Martini's ancestor, the Martinez was actually made with Holland gin. This version of the Martinez was first mixed for me by barkeeper Nate Dumas, who worked at Clover Club in Brooklyn:

Below are some basic Bols Genever cocktails to get you started. They are sorted by the experience of the drinker.

Novice: Never had Holland Gin before? Unsure how to drink it? Start off easy with a mixed drink like a John Collins, which is the original ancestor of the Tom Collins.

Combine all ingredients except soda water in mixing tins, add ice, and shake until chilled. Strain over ice cubes into a Collins glass, top off with soda water. Garnish with lemon wedge.


Veteran: This recipe by provided to me by Frank Cisneros, Bols Genever Brand Ambassador and bartender at Dram Bar in Brooklyn. If you enjoy Old Fashioneds, you should be ordering this libation.

Lounger: Fitzgerald suit - check. Pocket square in perfect Presidential - check. cuff links showing ... just enough - check. Lounging against the bar and want to change up the usual - check out this sublime variation of a gin sour which was the signature drink of the old New York Holland House bar.


Combine ingredients in mixing tins and add ice, shake rigorously for 10-12 seconds until well chilled, double strain into a chilled cocktail glass. Garnish with lemon peel - releasing the citrus oils over the drink before adding to the mix.

Professional: At this point you are well acquainted with Holland gin cocktails and use it in punches, Martinez cocktails, etc. You like the stuff so much that you are going back to basics, imbibing it neat in a Dutch tulip glass, with a beer chaser. In Dutch, this tradition is known as the Kopstootje (or mini-headbutt). David Wondrich's Esquire article explains how to execute it in five easy steps:

1. Put tulip glass on the table.
2. Pour a small glass (6 to 8 oz) of beer (a pilsner like Grolsch should due) and put it near the tulip glass.
3. Pour chilled genever carefully into tulip glass until it's so full that the top bulges.
4. Bending from the waist, take the first, generous sip of the genever.
5. Straighten up and have a sip of the beer.

Where to get it: Dram, find Frank, he'll head butt you.

Proost!!
Posted by Loungerati at 9:11 PM