What We're Drinking: If Hemingway could drink it...The Side Car

Though cocktail etiquette says put the summer time drinks in storage with your straw hats, I like to extent summer until the Farmer’s Almanac says it’s over — September 21. So to better smooth the transition between the hot dogs days and the first chill of Autumn, I like to start out with a sweet yet sour Sidecar cocktail. 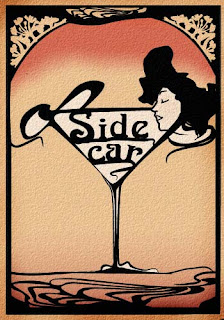 The Sidecar was invented in Paris (maybe in the famous Harry’s Bar) during the First World War. The inventor, an American captain, named the drink after a motorcycle sidecar in which he was chauffeured to and from the bar. According to cocktail mythology, the officer was under the weather and desired an aperitif before dinner. Brandy would be used to combat a cold in those days yet is traditionally an after-dinner drink, so the captain suggested that the bartender add lemon juice and Cointreau to lighten it up. Vitamin C is helpful when fighting colds too and the Brandy warms you up. Voila — this classic cocktail was born. In the 1920s, the Sidecar became a signature drink for the Hemingway/Miller ex-patriot crowd in post-war Paris.

In our opinion, the Sidecar might not be a panacea but it sure can lighten up your spirits. The combination of sweet (sugar on the rim) and sour (lemon juice & Triple Sec or Cointreau) plus smoothness of cognac make the Sidecar a pleasurable yet potent drink. However, I prescribe that you try not to drink more than two because they’ll knock you out faster than you can say general anesthesia!

I like to enjoy an excellent Side Car at Hudson Bar & Books in Greenwich Village.

Take a chilled martini glass and dip the brim lightly in a bowl of sugar as if you were preparing a Margarita with salt. Then combine the liquor and juice into a shaker. Shake it over ice and serve it up with a twist of lemon.

Be careful not to chintz out. Please DO NOT use lemon juice from concentrate or dreaded sweet and sour mix!!! Not only is this a cocktail foul, but it actually will detract from the true flavor and effect of the Sidecar.
Posted by Loungerati at 9:31 PM

Email ThisBlogThis!Share to TwitterShare to FacebookShare to Pinterest
Labels: Hudson Bar and Books, The Side Car, What We're Drinking