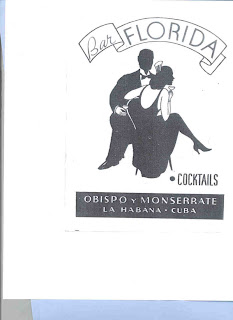 Havana, 1898. Cuban political activist, writer, journalist Jose Marti enters Havana with Teddy Roosevelt’s Rough Riders to cheering crowds as the last Spanish forces flee the island. To celebrate this victory and freeing of Cuba from Spain’s colonial yoke, Senor Marti mixes Bacardi™ rum, gin, and American soft drink Coca-Cola™ to symbolize the unity between Cuba and her northern big brother. Marti dubs the drink “Cuba Libre” and proceeds to tie one on with the future president of the Untied States!

If that sounded too good to be true, you are right. Unfortunately, Mr. Marti was killed in battle with Spanish forces on May 19, 1895 and Teddy Roosevelt was a Mint Julep man. Legend has it that circa 1900, an unknown officer of the U.S. Signal Corps mixed the first Cuba Libre in an Old Havana bar to alleviate the unbearable tropical heat. He toasted ‘por cuba libre’ and the drink was born.

La Storia: The original Cuba Libre differs from its modern equivalent. Apparently, it was made up of rum, gin, dash of bitters, Coca-Cola and a lime. The drink remained a local favorite well into the century and did not gain prominence outside of the Caribbean and southern United States until the 1940s when the Andrews Sisters recorded a song called “Rum and Coca-Cola” (1945) while in Trinidad. This catchy and steamy tune was a marketing coup for the rum producers. It was during the Trader Vic Rum/Tiki craze of the 1940s and ’50s that drinks such as the Cuba Libre and the bastardized Rum and Coke became popular. Rum was cheaper than whiskey or gin and Coke tasted better than club soda or tonic water. In no time, Cuba Libres were being mixed all across America from swank urban cocktail lounges to tiki torch-lit suburban patio parties.

The Drink: The ingredients that go into the modern Cuba Libre are rum (light or dark but not spiced) freshly squeezed lime juice, Coca-Cola™, and a slice of lime. Purists believe the Cuba Libre should only be served with Bacardi™ brand rum, however I disagree. First of all, the Bacardi™ available on the world market is in fact made in Puerto Rico. The original Bacardi™ factories in Cuba were commandeered by the revolution and the Bacardi Company fled the island and set up shop in the US commonwealth. Therefore, I drink my Cuba Libres with real Cuban rum - Havana Club light or dark.

Atlanta doctor John Pemberton created Coca-Cola™ in 1886. Originally used for medicinal purposes, it was offered as an alternative to bitters and it had a kick too: real cocaine that made the “exotic” Coke an instant crowd pleaser. Crucial in a proper Cuba Libre, Coke has since lost its cocaine edge and went on to become a pop culture symbol of American marketing. Some places use Pepsi in the drink, but the taste is very different to the connoisseur. Coke is it — or order a different drink.

Where to Get It:

* Bar Florida aka La Floridita - in Hemingway's old Havana haunt is probably the best place to get the real thing.
* Café Cabiria (Firenze, Italy) — when in Firenze (Florence) and wanting a hit of rum to break up the daily wine intake, I head across the Ponte Vecchio to Piazza Santo Spirito. There you will find a hopping little bar/café named Cabiria where your Cuba Libres are served with real Cuban rum - Havana Club. They are made to perfection and are a rum lovers delight.
* The Deco Lounge (at the National Hotel South Beach, FL) — getting served a properly made Cuba Libres while smoking a Cuban Cohiba in the Deco Lounge is as close to heaven as this Barfly can get. The place is Al Capone slick and they take their time making top shelf cocktails.

Squeeze juice of one slice of lime over 2-3 ice cubes into Collins glass, stir, and serve up with twist of lime.
Posted by Loungerati at 10:15 PM