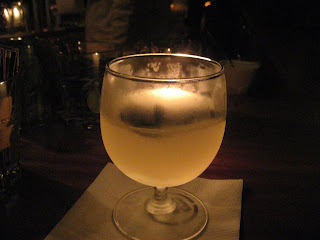 Macao Trading Company, the new joint venture from the fellas behind Employees Only and Chanterelle's David Waltuck is an ambitious bar/restaurant which features Portuguese-Chinese cuisine, top shelf original cocktails, and a vintage decor that is reminiscent of "mid-1940s Red Lantern district." The Tribeca location is non-descript from the street. One passes through industrial iron grated doors which are only illuminated by a red light and into a jovial atmosphere. The restaurant is buzzing and if a bar seat is available, get it - like the seats at Employees Only, they are considered real estate.

The menu is dividend into Large Dishes and Small Dishes and combines Portuguese and Chinese influence found in the ex Portuguese colony of Macao. All the choices are served two ways - Portuguese or Chinese - which is a relief because we are a little sick of "fusion." If eating at the bar, try the small plates and sample the entire menu. We started with Manila clams Portuguese style with chorizo, then we ordered the Portuguese lamb meatballs, which are stuffed with cheese and served in a spicy paprika sauce. Their Chinese counter parts are pork meatballs which are rolled in sticky rice, and steamed are worth a second order. Then it was a warm chorizo and melon salad and lobster dumplings...need I say more? For more on the menu check out the review on Eater.

Now for the Cocktails. The team behind the bar are veterans from Employees Only, Pravda,Schillors, and other top bars. Jason Kosmas, Igor Hadzismajlovic, and Dushan Zaric lead the crew and their experience comes through in the original creations and takes on classic cocktails. There are about a dozen specialty cocktails on the menu but we enjoyed these five the most:

Yellow Fever is a rye sour given the royal treatment. It consists of 100 proof Rittenhouse Rye, Benedictine, Lemon Juice & Egg White, shaken and layered over the mixologist ingredient of the moment, Cherry Heering. This concoction releases a medley of flavors from sweet to tart but goes down smooth and leaves you wanting more.

Kaffir Jimlet is a cocktail of Kaffir Lime-infused Plymouth Gin mixed with Lime Juice & Agave Nectar, served straight up. The Kaffir lime is a staple in Southeast Asian cuisine and is infusion with Plymouth gin and addition of sweet agave nectar creates a sublime version of the gin gimlet.

The Mah-Johng is a reinvented Rob Roy made with J & B Rare Scotch stirred with Navan Vanilla Liqueur, Carpano Antica Formula Vermouth & Macao Five-Spice Bitters. Generally, I am not a fan of Vanillas or other sweet liqueurs being added to traditional cocktails. However, the vanilla is so subtle and compliments the five-spice bitters without overwhelming the scotch.

The Arrack Fizz consists of Batavia Arrack shaken with Mandarin Blossom Water, Homemade Hibiscus Cordial, Pineapple Juice, and an Egg White, served in a tall glass. I recognized this drink from EO. See Jason tested the drink on me on several occasions. I gave feedback, he tweaked it, I drank more, gave feedback, he added ingredients, changed proportions, and the finished product is on the Macao menu.

Oh and I kept the best for last. Macao Trading also has a "speakeasy" lounge downstairs. The space consists of semi private booths and a small bar manned by quality bartenders. If you want a bar seat get there unfashionably early, say 8:30, or really late. Once the clock hits 9pm, the downstairs gets a door man and the line that comes with him. So get that prime real estate early and settle in for outstanding cocktails, superb bar food, and a chill scene.

(Photo of the Mah-Jong Cocktail)
Posted by Loungerati at 10:23 PM