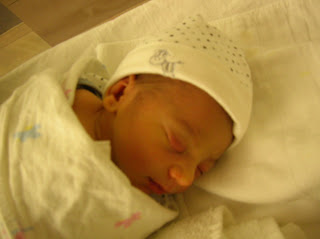 Speaking in short cadence with a pronounced, folksy Texas drawl, Senator declared, “In the birth of my son, America and my wife Shiny Object have prevailed.”

Joseph Lewis was born at 3:00 pm on Monday, February 16. He weighed in at 7.4 ounces, and measured 19.3 inches long. Although he struggled to breathe immediately after birth, he was soon healthy and doctors declared major birthing operations over moments later.

Senator noted that the important victory took place only after 40 hours of dedicated labor.

“Birthin’ babies is hard work. It takes courage to break the umbilical cord of oppression and fight for freedom,” Senator said, referring to the process as “cervixilization.”

He praised most of Menorah’s staff for their dedication, calling them “fine Jewish doctors and stewardesses [sic].”

“You provided us with four star services,” Senator said. “The abundance of bacon we ordered and received from room service was particularly welcome.”

He did have harsh words for two late night nurses, whom he referred to as “freedom haters” and “an axis of evil” who would not let him leave a bottle of Sambuca near the coffee machine in the “Family Nourishment Room,” citing strict interpretations of fundamentalist health law. Senator also decried having to drink champagne from Styrofoam cups, calling the facility’s supply purchasing staff a “hostile regime.”

Critics fired back at the Senator, saying the “mission accomplished” banner was premature, pointing out that he had no viable plans to leave the hospital and had even ordered an in room massage and a better day bed from hospital staff. Even Joe Lewis received criticism for failing to agree on a timetable of withdrawal from his mother’s womb. “Healthcare costs are astronomical,” one intern remarked. “Every hour spent in labor is a drag on the hospital’s overall economy.”

The criticism was “hogwash,” Senator said, saying that the citizens of the world would greet Joe Lewis with “champagne and biscuits” and clear a liberator’s path from the hospital to their home after his family enjoyed “a mid-afternoon cocktail and a long nap.” That plan was “shortsighted,” said one nurse, because Senator had lost his contact lenses and he would have to wait for his mother-in-law to drive them home.

Also, in a memo uncovered by Dan Rather and CBS news, it was alleged that Senator wore Brooks Brother’s pajamas instead of the implied surgical scrubs worn at the press conference and never once “looked south” during the process of delivery. The memo also said that Senator went AWOL later that night and was spotted drinking a Martini at the famed Bristol Restaurant across the road before returning later that night smelling of blue cheese stuffed olives and Purel, supplying the aforementioned champagne and biscuits himself. Senator neither confirmed nor denied the rumor. 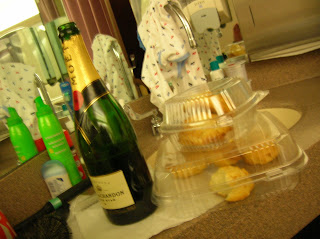 Later that night, speaking from his home bar, “Red Room West,” the Senator tried to put his best spin on the matter, pointing out that Joe Lewis was born on President’s Day – a harbinger of great things to come.

“Ladies and Gentlemen,” Senator said, lifting the baby lounger and smelling his backside momentarily before handing him off to his wife, “A change is coming to ‘Merica.”


Senator pushed President Obama to add a “Champagne and Biscuits for America’s Birthing Centers” provision to the stimulus package, only to see it cut from the bill’s final draft.
Posted by Loungerati at 10:03 AM

Email ThisBlogThis!Share to TwitterShare to FacebookShare to Pinterest
Labels: Champagne and Biscuits, Joe Lewis, The Senator