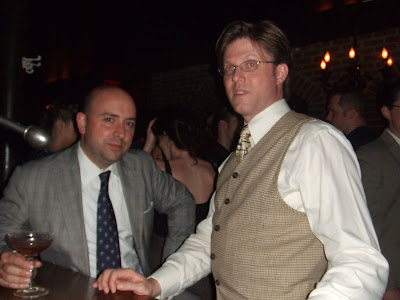 Swing Tuesdays. Bleecker and Broadway. Woodson & Ford, a speakeasy under the Corner Cafe. Down the steps, metal door. What's the password? When My Blue Moon Turns to Gold Again - but you didn't hear it from me. Hot outside but through the door a blast of cold air. Doorman checks guest list, I'm not on it. But I'm dressed impeccably. They say I'm good so I'm in. The oak bar takes up the length of the room which is reminiscent of low lit cave. The requisite taxidermy and leather club chairs were text book, but the libations were top shelf.

The scene on that Tuesday: Lindy hoppers. Some dressed in period, but most in civvies. They got there early. They marked territory. They were all business, meaning jitterbugging from the minute they put their dancing shoes on until the music stopped. They provided quite a show and thankfully there was air conditioning.

The Loungers were there too. We were dressed to the nines and tipped well. It was like old times, I was the first one there (natch), seasoned barfly Grumpy Old Hepcat (not his real name) came in from Jersey and literally knocked folks over to get to the mahogany. He called it dancing. I called it thirst. Giancarlo Zanetti arrived sporting Moscot black frames and a velvet jacket - in the middle of the summer - only Zanetti!!! The Lady in Red was there swounging (dancing, lounging, and drinking as opposed to just dancing and water guzzling) as was Atalanta sipping Southsides. This could have been five years ago. The talk at the bar was that of the Sporting Life and the usual lounger banter. All that was missing was the Senator, Jee Jee, and Mr. Swank. However, unlike the old days, the drinks are better thanks to the crew behind the stick. Speaking of drinks, some of our favorites:

The Admiral Warrender (Blended scotch, QI smoked black tea, demerara, and orange bitters)(Note: This Highland concoction, which was developed by mixologist Lynette Marrero, by far was the Loungerati favorite)

They also have an excellent selection of "Wine, Ales, & Elixirs" which include wine by the glass or bottle(Brancott Pinot Grigio from New Zealand, Lacrima Di Morro D'Alba, Italy) and micro brews(Brooklyn Summer Ale, Magic hat No. 9, Blue Point Toasted Lager to name a few.) If you need to snack while imbibing, try their small plates menu that ranges from a $6 cheese selection to Wild Salmon Tartar, to Chorizo in Brandy & Red Wine.

Check out W&F on Tuesdays for the Swing/Jazz night or any other day of the week for their world class cocktails and cool vibe.