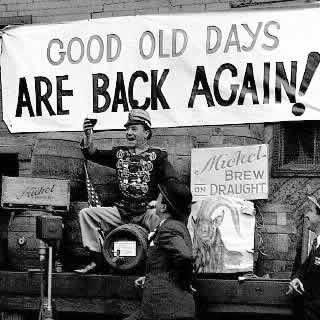 On this day, December 5th, in 1933, the 21st Amendment to the US Constitution became law. This piece of legislation repealed the 18th Amendment's Prohibition of alcohol. The last state to ratify the amendment in the State conventions, thus passing the 3/4 majority required to amend the Constitution under Article 5, was Utah! So three cheers to Utah!

Section 1. The eighteenth article of amendment to the Constitution of the United States is hereby repealed.

Section 2. The transportation or importation into any State, Territory, or possession of the United States for delivery or use therein of intoxicating liquors, in violation of the laws thereof, is hereby prohibited.

Section 3. This article shall be inoperative unless it shall have been ratified as an amendment to the Constitution by conventions in the several States, as provided in the Constitution, within seven years from the date of the submission hereof to the States by the Congress.

Today is also the third anniversary of Loungerati. In 2006 as the lounge website Tommywhitetie.com was closed down by it's eponymous founder, a select group of Loungers refused to go quietly. It wasn't last call yet, and there was an open bar of opportunity and ideas. Loungerati was born on a cocktail napkin and continues to serve as an outlet to those who enjoy Lounge culture, the sporting life, exquisite cocktails, classic music, and a good time!

So please join us at WARD III in Tribeca, NYC tonight to celebrate your right to imbibe and Loungerati's birthday.
Posted by Loungerati at 1:22 PM