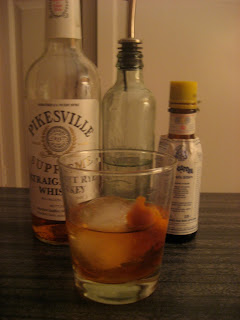 "Water, either plain or charged, has no more place in an Old-Fashioned than it has in a Manhattan or Martini."- David A. Embury, The Fine Art of Mixing Drinks

The Old Fashioned is considered among many as the world's first cocktail. In it's purist form, the drink is a jigger and a half of a base spirit, sugar, and bitters, garnished with a lemon or orange peel or both.  Unfortunately, the recipe has been bastardized since its' invention* at the Louisville, Kentucky's Pendennis Club in the late 19th century.  Today, the method most bartenders employ to make an Old Fashioned is to muddle pieces of fruit, typically orange rind, maraschino cherry, and lemon, with sugar and bitters. Then they shake the ingredients with Bourbon and ice and pour the concoction (ice and all) into a rocks glass. The drink is then topped off with club soda and garnished with cherry, orange slice, etc. In my opinion,  this drink appears to be a type of cloudy bourbon fruit fizz and not technically an Old Fashioned.

I have search my library of cocktail literature and cannot pinpoint exactly what year or time period the Old Fashioned became a fizz.  I surmise this transformation happened during Prohibition when the taste of bootlegged or home distilled whiskey was masqueraded by the addition of fruit to the recipe. They did this with gin but again I have no written proof, just conjecture.

We know that by the 1950s,  drinks writer and aficionado, David A. Embury rails against water or soda in the drink and calls excessive fruit decoration "garbage." Embury includes the Old Fashioned in the six basic cocktails that everyone should master in his must have book, The Fine Art of Mixing Drinks. His recipe for the quintessential Old Fashioned is the one I use religiously. My spirit of choice is an 80 proof Rye such as Pikesville Supreme Straight Rye Whiskey or Old Overholt.

"Pour into each glass 1 to 2 teaspoonfuls simple syrup and add 1 to 3 dashes of Angostura. Stir with a spoon to blend the bitters with the syrup. Add about 1 oz whiskey and stir again. Add 2 large cubes of ice, cracked but not crushed. Fill glass to within about 3/8" of top with whisk(e)y and stir again. Add a twist of lemon and drop the peel in the glass. Decorate with a maraschino cherry on a spear. Serve with a short stir rod or Old-Fashioned spoon."

Embury adds that the recipe is not written in stone. He encourages experimentation using different base spirits such as Applejack, Rum, Gin, Brandy, and Scotch. He is not shy with adding modifiers either, suggesting Chartreuse, Cointreau, and curacao, amongst others.

Taking this advice to heart, these Old Fashioned recipes are currently on rotation at my home bar:

Muddle sugar and bitters in a bar glass, ad the tequila. Stir ingredients over ice, then strain over a large ice cube in an Old Fashioned glass. Garnish with lemon peel.

Stir ingredients over ice in a bar glass, then strain over a large ice cube in a rocks glass. Garnish with an orange peel and a grapefruit peel. The inspiration for this cocktail is the Young Laddie developed by Joaquin Simo of Death & Company in New York. Joaquin uses Bruichladdich Scotch in his complex yet refreshing masterpiece.

Go back to basics. Rediscover the Old Fashioned and mix it up using other base spirits. Add a variety of modifiers, different types of bitters, and sweeteners. Mastering the Old Fashioned is not only the way to "roll" better drinks, as Mr. Embury is fond of saying, but also an excuse to experiment and expand your palette by understanding the building blocks of cocktails.

* According to drinks historian David Wondrich's Imbibe! Chicago politician Samuel Tilden mentions the old-fashioned cocktail in an 1880 speech, The Pendennis Club was not opened until 1881. Thus, one can infer that the cocktail did not originate at the club that has claimed this honor for over a century.

(Correction: In 1880 Samuel Tilden, a New York politician, Governor, and Presidential candidate, gave a speech in which he declares he will not to run for President again. He references the Old Fashioned in the final toast to fellow Democrats encouraging them to drink, "Hot-whiskies ... sour mashes and old-fashioned cocktails." - Imbibe! page 197.)
Posted by Loungerati at 12:06 AM