No Mistakes at Art of Cocktailing 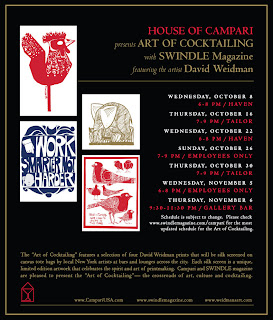 In the past month, the "Art of Cocktailing" series presented by House of Campari with Swindle Magazine was held at several of New York's premier cocktail bars, including Tailor, Employees Only (EO), Haven, and Gallery Bar. The idea behind the collaboration was to mix the art of drink creation (using Campari) with actual art. The featured artist was Los Angelas-born David Weidman, who became prominent in the '50s and '60s in the advertising and animation fields. Weidman's original prints are collector's items, and AoC event goers received complimentary tote bags with a choice of four silk screened prints.

I popped in to Tailor for some Campari aperitifs. In addition to the stalwarts such as a well-made Negroni, I also had the Milanese classic, Sbagliato (pronounced "spal-yacht-oh") which translates to the "mistake" in Italian. Essentially, one follows the Negroni recipe but mistakenly substitutes Prosecco or Champagne for gin. A mistake indeed! Below is the recipe:

Pour Prosecco over ice in a rocks glass, add Campari and Sweet Vermouth, and stir. Orange twist is optional.

Meanwhile, molecular mixology fanboy favorite, Eben Freeman, was making the rounds through the industry crowd dishing out Negroni-flavored caviar on silver spoons! After my Campari fix, I tried a few of Freeman's classics, including The Waylon (Smoked Coke, Bourbon) and his WD~50 import, the Butternut & Falernum (Rum, Butternut Squash, Falernum). The libations were spot on and no mistake in taste or originality. On the way out, I picked up a tote bag with a red rooster design, which also contained a Swindle magazine and other swag.