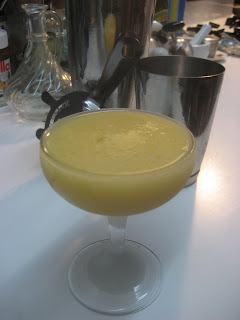 Tonight is the last night of my two week journey tasting cocktails from Charles H. Baker, Jr.'s Gentleman's Companion: Vol II. So why not end it with a proper nightcap, one that Baker claims to have imbibed during "a stay in Santiago de Cuba, in early spring of 1930." The Santiago Nightcap.

Mr. Baker continues his free publicity for the Bacardi company in his description of this fin de nuit potable. The recipe has been passed down to him by "Senor Facundo Bacardi" via a field representative. I decided to stick with authentic Cuban rum.

Shake hard with cracked ice and strain into a large saucer champagne glass (I used a chilled coupe).

The drink is the color of vanilla pudding and the consistency of a flip. At first sip, one gets the orange curacao, the slight bitterness of the orange like flavor mix with the caramel, and molasses of the aged Rum. It goes down creamy and smooth.

Where to get a Santiago Nightcap? Heaven's Dog in San Francisco has a Charles H. Baker. Jr influenced cocktail menu. I am very sure their barkeepers could whip one up for you before you call it a night.

I have certainly learned from my endeavor. My favorites where his Cuban drinks. The Daisy de Santiago, The Remember the Maine, the Hotel Nacional Special top the list. There are so any others I didn't chronicle but drank during my quest, including the Ramos Fizz and the Pan American Clipper. I highly encourage you to buy Jigger, Beaker, & Glass: Drinking Around the World, which is the republished version of the Gentleman's Companion: Vol II, and sample some of these 267 exotic drinks from the golden era of cocktails.
Posted by Loungerati at 9:55 PM