Ray Gelato at the Blue Note 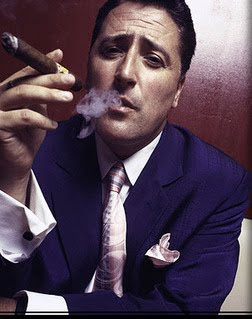 I had the great privilege of attending Ray Gelato and the City Rhythm Orchestra's only New York appearance at legendary jazz club The Blue Note tonight. Ray Gelato is a jazz saxophonist who has been playing for over twenty years in Europe and the United States. He has been compared to Louis Prima but is hardly a cover man. Ray's original compositions and swinging anthems such as "Tu va fuo' Americano" have made him reknown internationally. He is a regular at the Umbria Jazz Festival and a must see when visiting Ronnie Scott's 100 Club in London.

I have been following Ray Gelato for over ten years. His show at Windows on the World on August 25, 2001 was the last gig I ever saw at the World Trade Center. Ray has played my friends' weddings (my friends Joe and Debbie were in the audience celebrating their fifth anniversary, Ray was at their wedding). I have seen him at Swing 46, Cache, and where ever I can catch him! Tonight was no exception.

I met up with old schooler Joe Wood of RetroSpective Magazine, Grumpy Old Hepcat of Loungerati, and Signore Gelato and his entourage of South Philly musicians at the bar (natch). We caught up, sipped cocktails, showed baby pictures, and heck - I even agreed to write a cocktail column for Joe's project. Ray seemed pleased and went on to perform an outstanding show which not only showcased his talents but those of his band mates. They played Prima standards like "Angelina Zooma Zooma" but also vintage instrumental numbers like Lionel Hampton's immortal "Flying Home." Gelato also treated the audience to his own compositions like "Mambo Gelato" and "A Pizza You." He was at his best and the City Rhythm Orchestra didn't miss a beat.

Check out Mr. Gelato for yourself singing "Walk Between The Raindrops" at one of his performances: